My current project has reached the point where we have to manage our infrastructure in a more organized way rather than ad-hoc manual configurations.

We use a pretty standard setup for a .NET web application.

We keep our code in one monorepo hosted in internal GitLab. We use TeamCity to build our code and we use Octopus Deploy to run our deployments to Azure.

We have several environments (let’s call them feature, test, and prod) and they all are different. Each one has a different configuration, different accounts, different topology, different numbers of replicas and shards, you name it.

At this point, we would like to utilize the configuration management feature provider by Octopus, and that’s why we would have to jump through several hoops to marry terraform configs and Octopus variable substitution mechanism.

Scope of the problem

We’d like to move to an Infrastructure-as-a-Code approach and provisioning our system automatically as a part of our CI/CD pipeline.

To do that we’re going to add Terraform to the game.

At the time I’m writing this post the versions for the software are the following:

This part is not very important, but to provide you with the full picture I’ll put it here.

We keep our Terraform files in the same repository alongside the application code and database schemas. Basically, it’s just an \infrastructure directory in the root of the repo.

We run our application in Azure, hence the choice of Terraform backend and a provider: we keep Terraform state in Azure.

Please refer to the official documentation for a detailed step by step guide on setting up storage for Terraform State.

In short, you’d need to run the following:

Once you’ve successfully created a storage for your state you can update your main.tf file with the backend configuration:

For the purpose of this blog post I’ll be creating just a new resource group with one SQL server.

Let’s declare our setup in a new sql.tf file:

note that I’m using variables in a gist above.

Variables are defined in a variables.tf file:

This works fine, but for the local testing I keep the terraform.tfvars files with the values:

values are not encrypted, but they are just for the local tests and experiments. They will be replaced with the environment-specific vars by Octopus later.

Octopus has a specific syntax for variable substitution. Usually, it looks for #{Variable} markers in your config files. As you can imagine they are not always valid as resource names.

As I mentioned before our terraform.tfvars has realistic values for local tests. It helps our infrastructure engineers verifying their work by running terraform plan commands.

However, when we build our packages we want to convert tfvars file to replace variable’s values with the syntax suitable for Octopus.

I had to invent a convention here.

To do that we’ve set up a build step with the following PowerShell script:

After that we can build our code and then create a release package with our Terraform config.

A TeamCity build configuration has a custom %octopus.package.suffix% variable declared. This is a suffix that is composed of the branch name. It’s empty for the master branch build and has something like feature-AB-123 for a feature branch with an AB-123 name. Yes, this is a JIRA ticket name :)

With this variable we can prepare a zipped artifacts file:

that would produce a file Terraform.1.123.9-feature-AB-123 which will later be uploaded to Octopus. 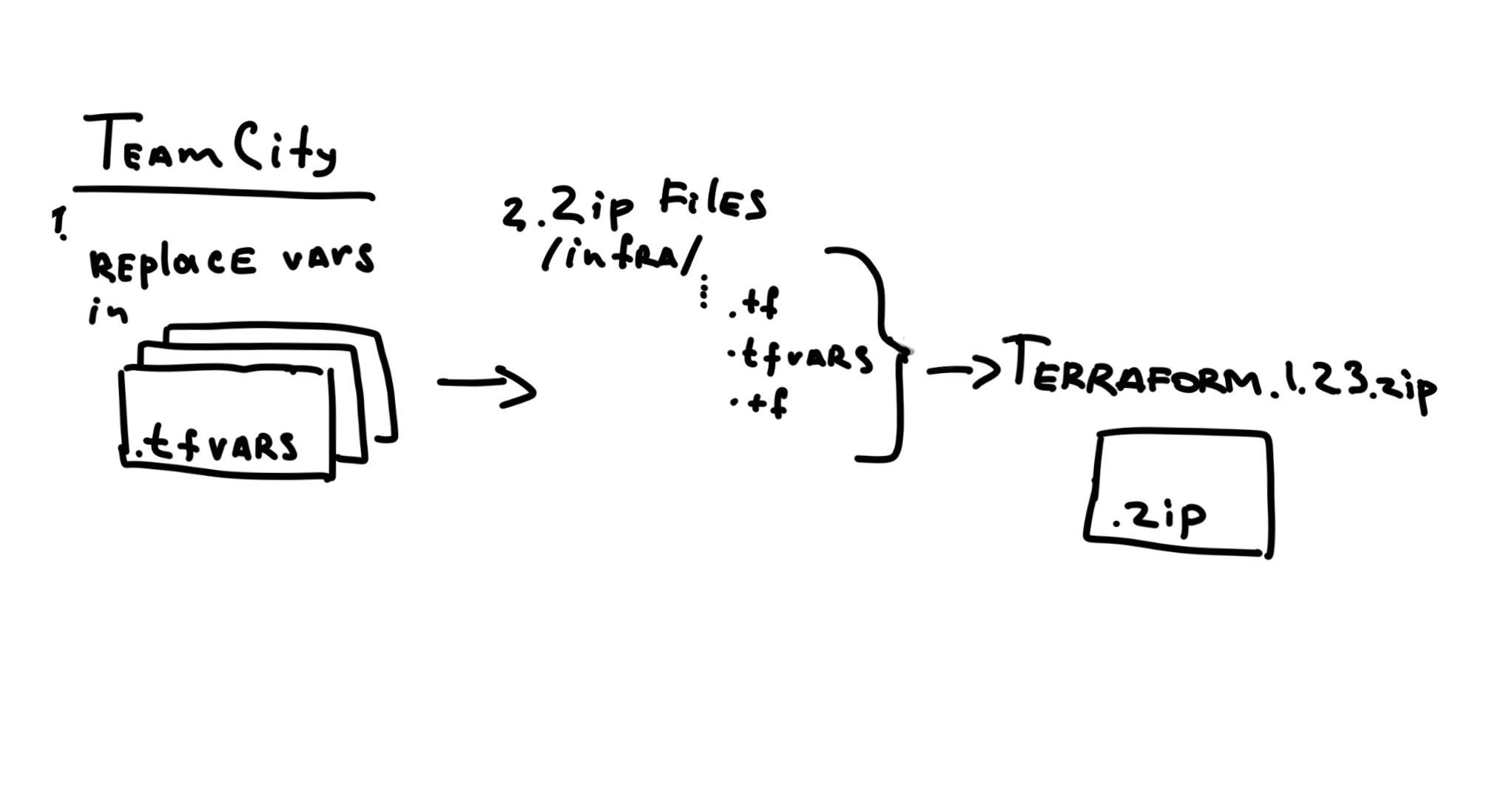 We currently use an official Apply a Terraform template.

However, there are few things which we had to configure in order to make it work for us.

First of all, Octopus cannot keep up with Terraform development, so you may need to update a terraform.exe version yourself. Just grab the latest version from Terraform Downloads page and put it in a folder on your Octopus server. Something like C:\Program Files\Terraform would do.

As you remember the release package contains a terraform.tfvars file with templates in it. So don’t forget to tick this box: 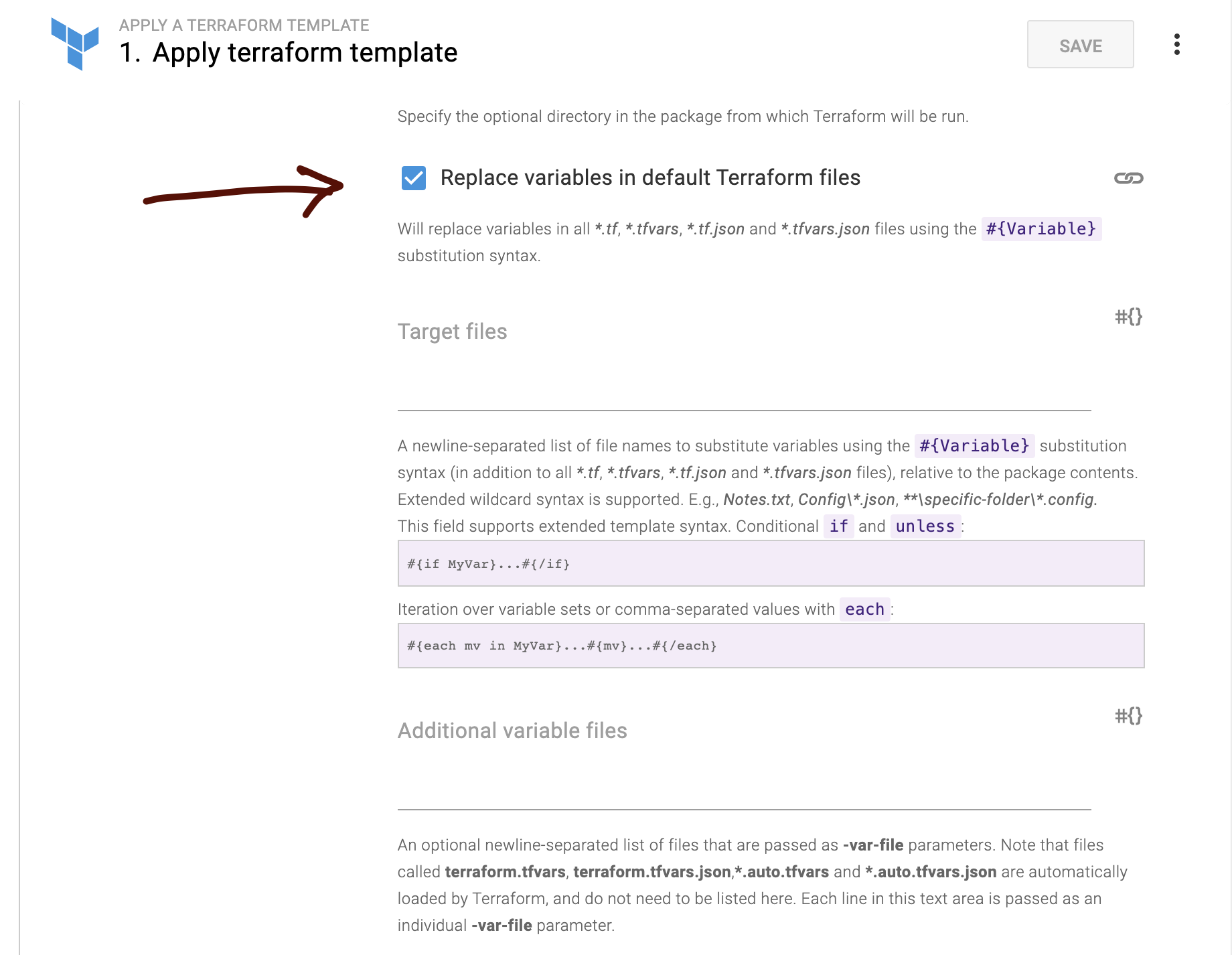 And of course, you will have to define your variables for each environment:

note the variable name format. It should be the same as the variable names in your terraform.tfvars file. Here we can have different values for each environment. Also, we store passwords encrypted.

And now we have a new player in our CI/CD pipeline: